We and our bikes arrived from Munich by train at Milano Centrale. It was an uneventful ride, even changing trains in Verona’s station Porta Nuova – which is in upheaval due to construction – went smoothly.  Once in Milan, we were anxious to get to our hotel and didn’t take much notice of the station. But the next morning we were there with our cameras and had a great time capturing Mussolini’s monument to the glory of the fascist regime.

The station was designed by architect Ulisse Stacchini and modeled after Union Station in Washington, DC. Its cornerstone was laid by King Victor Emmanuel III of Italy  in 1906, but due to the Italian economic crisis during World War I, construction proceeded very slowly. In the course of its construction, the project kept changing and became more and more bombastic, particularly when Benito Mussolini became Prime Minister. He wanted the station to represent the power of the fascist regime. The station is a blend of many different styles, especially Liberty and Art Deco.

Have a look at more of my pictures of the station here. 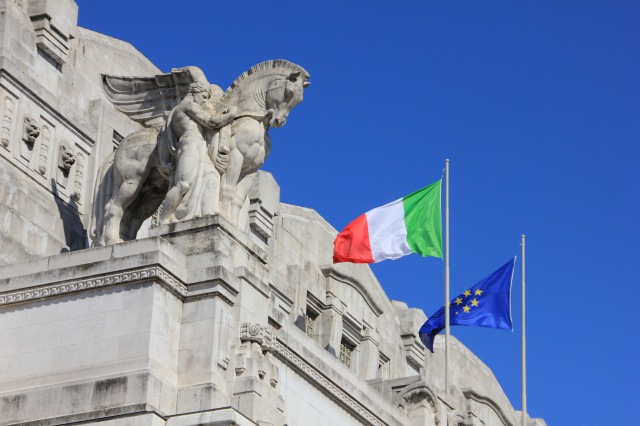